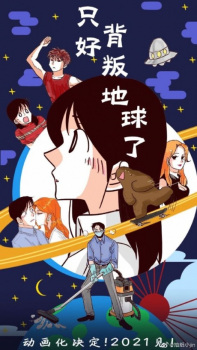 Plot Summary: Lu Fan, a white-collar urban woman who has always considered herself a more ordinary woman than anyone else, is suddenly abducted by an alien one day. The alien, who claim to be from Saturn, tells the absurd reason for their invasion of Earth, and that the key to the invasion plan is to make Lu Fan fall in love with him and then betray the Earth. In the funny daily life with the Saturnian, aliens from various planets start to appear around Lu Fan one after another! These aliens have their own objectives, but because of their intertwined destinies, they all end up in Beijing. Lu Fan begins to realize that she is not as ordinary as she thought, and she slowly develops a crush on the Saturnian. How will she choose?

Other name: No Choice But to Betray the Earth, Have To Betray The Earth, 只好背叛地球了