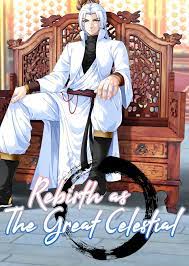 Rebirth as The Great Celestial

Plot Summary: The Nine-heavens Crystal brought Lin Haotian back to life. In this life, he is Lin Que, a son of a declined family. One of his father’s friend took him in and wanted to marry his daughter to him. However, his wife and daughter clearly hate his decision and make his life hard. Lin Haotian, now called Lin Que, decides to leave and regain his cultivation again. Although he is far weaker than before, he is incredibly strong in the eyes of ordinary people. They regard him as “Mr. Immortal.” So what his life will be in the earthly world? Can he figure out the mystery of the Nine-heavens Crystal? Please do not call me “Mr. Immortal.” I’m just an ordinary cultivator.

Rebirth as The Great Celestial